Hayley Smith has worked in childcare for over ten years and has worked her way up the ladder, learning and developing her practice during that time. Hayley began her career in childcare as an unqualified nursery practitioner, she gained her NVQ level 2 and 3 and that fuelled her thirst for learning. Hayley now has BA (Hons) Early Childhood Studies and Early Years Teacher Status and is working towards an MA Inclusive Education and Special Educational Needs and Disability whilst in her current role as an Early Years SENCO and Early Years Teacher.

Anyone who knows me professionally will tell you that one of the acronyms which best describes me is ‘ASK’ (Always Seeking Knowledge) and what better place to ask questions and seek knowledge than Childcare Expo, filled with a variety of representatives for some of the best things that the sector has to offer? 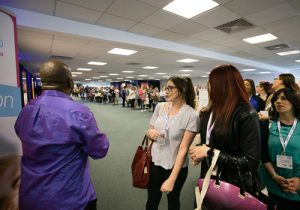 The first Childcare Expo I visited was conveniently located in my home city of Manchester back in 2016 and I registered for the event as soon as I read about it, as I didn’t want to miss out! From the time of my registration, I received ongoing communication from the event team and the day of the expo soon arrived. I left home nice and early to get to the venue in time for the doors opening, as I was feeling a mixture of excitement and apprehension at the unknown. I’m almost certain everyone realised that I was a first-timer as I wandered in through the doors of EventCity, but I was quickly put at ease by the efficient and friendly team who provided me with my very important-looking pass and lanyard! As I joined the queue to enter, I took a minute to look around at the multitude of other professionals alongside me (all wearing their important lanyards) and I realised that I belonged there. I could feel undertones of apprehension being overwhelmed by a buzz of excitement radiating from the visitors, and I felt a realisation that the passion which we clearly all shared for childcare meant that we all belonged there.

As the doors opened and the queue began to move forward, the buzz became more intense as the noise level rose. Ironically, I would liken us at this point to the infamous ‘kids in a sweet shop’ as we didn’t know where to look first! With my free Childcare Expo tote bag on my shoulder, I quickly formulated a plan to start at one side of the hall and snake my way up and down the rows of exhibitors so I didn’t miss anything. On my ‘snakey’ journey I met with many and varied practitioners and professionals, all of whom were extremely engaging and knowledgeable about their particular area. Although there were some stands which didn’t appear to be directly relevant to me at first glance, such as insurance and legal services, I found it interesting to know that these companies existed and what their role is in the childcare domain. As I continued around the hall, my attention was grabbed from all directions as I noticed varied resources and equipment on show, I became increasingly inspired as I viewed things with my own setting in mind.

I came away from the expo with bags full of information and a head full of ideas! A few months later I travelled to Coventry to attend the Midlands Childcare Expo where I had a similarly engaging experience and this year I returned to the Manchester Expo with a colleague who has now also caught the Expo-bug!