All babies seem to have an undoubtable talent for hiding the smallest yet most important objects in the strangest of places! Anybody who has ever worked with babies will recognise and understand that feeling of frustration; a child’s parent arrives at the door and you turn to look at the child to see that they suddenly only have one sock on, and now it is nowhere to be seen, even though they had both of them just two minutes earlier! Or perhaps it is that elusive dummy which you have been chasing around the room all day that has completely vanished again! Not much adds more awkward urgency to the hunt for these little items than having a parent stood watching you search. In the back of your mind you know that the hunt is almost completely in vain because your brain simply doesn’t work in the same way as that of a 12 month old; where you think that these things are likely to be in the book box or perhaps in the ball pool, those children know that they have abandoned that particular item half way through a tunnel or maybe stuffed it inside a hand 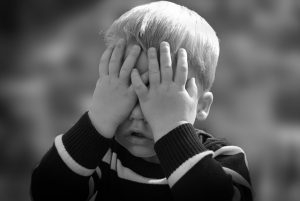 puppet when nobody was looking!

Babies come to nursery with a large amount of baggage for such little people; socks, dummies, bibs, bottles, muslin cloths, comforter teddies or taggies… the list goes on! It is most definitely a skill which to keep track of all of those things and have them instantly to hand when a parent turns up. NVQ’s certainly don’t teach that practical skill and I believe that it only comes with many years of experience, though I have been working in childcare for over 10 years and I still find myself part of a search party on most evenings so I have obviously not yet developed that particular skill.

Some companies are obviously aware of this issue and have developed creations with the intention of addressing the specific items which are most frequently lost. For example some dummies can now have dummy clips which attach to the child’s dummy at one end and then to their clothing at the other end, that’s a great idea until we remove them from the child when they go to sleep and now you just have one more thing added to the inventory of items requested by parents at the end of the day! More recently has been the introduction of ‘sock-ons’ for socks, whilst these ingenious things might look like something which is straight out of ‘Dragon’s Den’ they are now readily available on the high-street and they do seem to actually work – maybe they should come with every pair of socks!

So for anyone reading this who is a parent of babies or young children, please bear with us – we haven’t lost your child’s things, we just don’t know where they are right at that very minute! And to those of you who participate in your own Baby Unit Treasure Hunt each evening – you’re not alone, I’m sure the same thing is happening in nurseries everywhere!

The show must go on!

Do You Need To Budget For A New Baby When You Already Have Children?
X
Sign up for our Newsletter
This site uses cookies More info
Scroll to top
LONNORMID