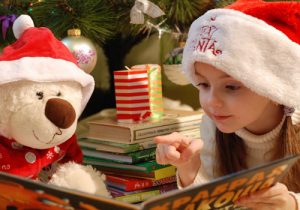 As December arrives, cards and wrapping paper appear on shop shelves and the opening of advent calendar doors is added to many daily routines – the countdown to Christmas is well underway! But for those of us working with young children, preparation for Christmas is likely to have begun weeks or even months ago – the gathering of masses of ideas (and masses of glitter) for the production of numerous pieces of artwork and, of course, practicing Christmas Carols for the impending performance. I use the word ‘performance’ with some reserve as a colleague of mine always maintains that calling it a ‘performance’ or a ‘show’ carries high expectations, and much prefers to refer to it as merely ‘a gathering’. The ‘gathering’ quickly escalates back to a ‘show’, however, once the children’s parents are informed about it, and the excitement level continues to rise as grandparents also start to make plans to attend.

Whilst we can be fairly certain how parents and other family members will respond to the idea of a Christmas ‘gathering’ where they can watch their children singing, the responses of the children on the day are far more unpredictable. It is not uncommon for children who are usually very confident to seek support from a member of staff as they can become overwhelmed, and any children in the class who are in receipt of regular additional support may be a different consideration entirely. Those children who are supported daily by a familiar adult can really give us something to think about. Whilst some settings might choose not to include these children in their ‘performances’ to eliminate any risk of anxiety or stress, I truly believe that all children should be given the opportunity to participate if they are able to do so with the necessary support.

Christmas performances are undoubtedly one of the most stressful things that a teacher or Pre-School practitioner will endure throughout their year, but I would argue that they are also one of the most rewarding. Having participated in a number of performances myself alongside a wide variety of different children, I have witnessed the sense of belonging coming from the children at being part of something so great. I have also witnessed the proud looks on smiling parents faces and the teary thank-you’s to the staff following each show. In my personal experience, the words of gratitude have been even more emotional from the families of children who have required additional support to allow them to join in as those children have achieved so much more.

So perhaps the person who was stood behind you in the queue at the supermarket, humming the tune of ‘Frosty the snowman’ in the middle of October had spent their day singing the song to a class of around thirty 3 or 4 year olds! Perhaps you thought “It’s too early for Christmas songs” but for those of us working with children it’s not too early, it’s never too early to create that sense of belonging and that feeling of pride.