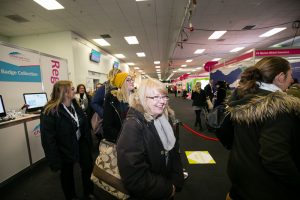 meteorologist delighted announcement that we were facing the coldest snap since 1959, just the week of the event.  And yes, there was no hint a of a Michael Fish because the cold snap delivered a white wonderland of glory and chaos in equal measure.

London coped as it always does with those who remember winter just getting on with it and those looking for a reason not to come to work pleading all sorts of excuses.  The trains delivered a random service, it doesn’t take much to disrupt them although I think the excuse from Southern of an 8ft icicle in a tunnel stopping all the trains probably got the rotten tomatoes prize. The bus drivers of London deserved the LEYF Curly Wurly award. The LEYF nurseries all operated albeit with some adjustments to ratios as staff took longer to arrive, or because of burst water pipe.

Attending  Childcare Expo on time was imperative. I arrived wrapped up but to meet hundreds of people who bravely travelled from much further afield. The welcome was warm including a well-made cup of tea and a packet of Cheese and Onion crisps.  That is a serious treat for me, but I reckoned the cold would burn off the calories.

An event like this is always useful for catching up with people. The first person I met was Purnima Tanuku from NDNA fresh from telling the press that we still do have a recruitment crisis and it’s getting worse. 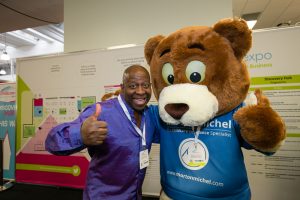 Next up was a visit to EYNP and Katie telling me that she had driven on the one open lane from Bristol that morning. It was worth it to talk to colleagues about the importance of nutritious food at nursery.  In my view we have a duty to do something because children are being poisoned by processed food, and the country seems to still be asleep to the fact.

Dave Benson Phillips was the host and we talked about men in childcare, an issue he strongly supports. It was good to hear that from him because although we have been campaigning since 2010 publicly we still have not made a big enough dent in people’s consciousness across the sector. We hope to raise it publicly soon on the Victoria Derbyshire show.

Finally, I gave my own seminar on “What Education Looks Like in a nursery”.  It’s my latest campaign as I truly believe that unless we get parents to 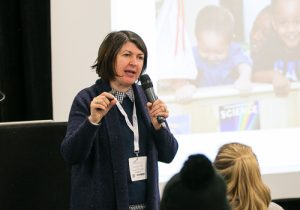 understand what education looks like for small children, they will continue to think they must move them out of nursery and into school settings.  The reality is a good nursery can educate a child until they were nearly 6 years old. We did this for generations and they still do it in Europe and other parts of the world with great success.

Look out for this campaign and strengthen your pedagogical conversations with parents.  Help parents to articulate what education looks like in a nursery and we are one step forward to getting the public to value the education all small children deserve.

Switch on your creative mind