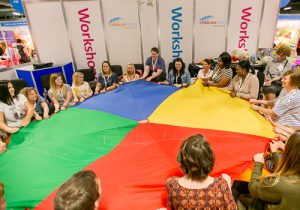 Call it a dereliction of duty if you must but I tried out Funky Feet Music’s Lark in the Park CD with a group of kids whose top 5 school run requests are 1. Dog Eat Dog by Adam & The Ants 2. Going Underground by The Jam 3. Anarchy in the UK by Sex Pistols 4. Heart of Glass by Blondie and 5. I Die, You Die by Gary Numan. The poor unassuming victims of a Childminder who grew up in the post punk pre-Disco Thatcher era. These are kids who (at 3) came to me knowing the lyrics to Lady Gaga’s Bad Romance and Katy Perry’s I Kissed a Girl. I kid you not. To call these kids an atypical audience is an understatement and therefore my expectations of Lark in the Park were pretty low, I’ll be honest. Still, the night before, I listened to the CD and read the instructions from the accompanying guides. I’d just like to say at this point that these guides are really good. The instructions are clear. The links to the EYFS areas of development are relevant. The extension activities are cross referenced with Key Stage 1 and the observation prompts are very useful for assessment and next steps purposes. Anyway, Duck Says Quack, Ey Ey Yippee and Wise Old Owl seemed the easiest ones to try out first so I practised them. (Funny, husband, son and dog didn’t bat an eye at the lady of the house prancing around the family room banging coconut shells together at 8.15pm without so much as a sniff of strawberry gin with elderberry… yet). 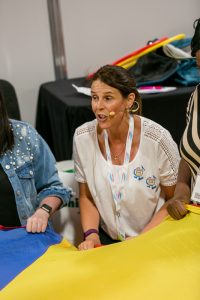 Following this trend, my mooching around for scarves, cowboy hats, pegs & puppets the following morning caused little more than a minor distraction too – barely an upward glance actually from the bistro the kids had set up for themselves. The plat de jour was daisies with bark chips & pea gravel and they had 4 demanding customers waiting already so…yeah, nobody paid much attention. So while we were all preparing our real lunch later I asked if they wanted to try out Funky Feet Music after we’d cleared all the dishes away and cleaned up. You know, instead of reading stories or doing yoga. This was a departure from their routine and so, to tempt them, I played the CD quietly in the background while we were eating. It might not have been the greatest idea I’ve ever had because they couldn’t keep their bottoms still: wiggling to the music and waving their arms about with cheesy tagliatelle on their forks and buttered corn-on-the-cobs in their other hands. Nobody wanted to finish lunch aaargh!

Remember country dancing at school (and by country dancing I mean the Gay Gordons not Achey Breaky Heart)? And music and movement? Where a huge TV on a table on castors was wheeled out of a cupboard and into the hall and every kid in England had to listen to Music Time on BBC Schools Radio every Wednesday at 10.23 precisely. I do. I used to wish I had nits so I could go and have my scalp scraped by the school nurse rather than endure that. Well, this is nothing like that. Because this is brilliant! There’s just nothing quite like the sound of a bunch of little 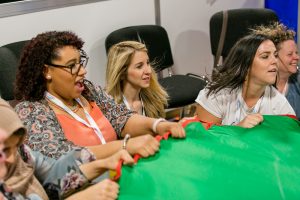 kids giggling. Nothing like it in the world. The kids didn’t know any of the words to the songs yet but they could do the actions. This is letters and sounds phase one only better: much, much better because it’s interactive and engaging and spontaneous. Now, I’m not going to pretend that Pegging Out The Washing and Throw Your Scarves is ever going to replace our post-punk-pre-disco fest on a 1 hour trip to the seaside but for a 10 to 15 minute pick-me-up Funky Feet Music has definitely become one of our go-to activities. Incidentally, I should add that the CD also came in very handy as a diversion for a child in the rumble stage of a meltdown. Phew, that was close! Who knew Hop Little Bunnies had such powers? Mum and Dad are using that track at home now too.

Moving forward, we plan to use Lark in the Park as an icebreaker for when the new children join us next term because come on, nothing helps us make friends better than a good old song, dance and a giggle. Also, we’ve added it to our ‘my-home-to-your-home’ resource library; that is, resources that children can borrow to share with their own families in their own homes.  Oh, and we’ll be purchasing futures tracks on iTunes too so we can listen to the songs anywhere we like whether it’s as a whole group in the garden or just one little one having a bit of me time in front of a mirror. For a preview of Funky Feet Music why not take a peek at their youtube channel. I recommend starting with Lark in the Park (track 3) – coz it’s brill!

The accompanying pictures are from Funky Feet’s workshop at Childcare Expo Manchester with Kim Pott. They will be returning to Childcare Expo Midlands in September for more sing alongs and giggles. Find out more here.

Have you got a product you would like Andi to review for you? Get in touch with her today.